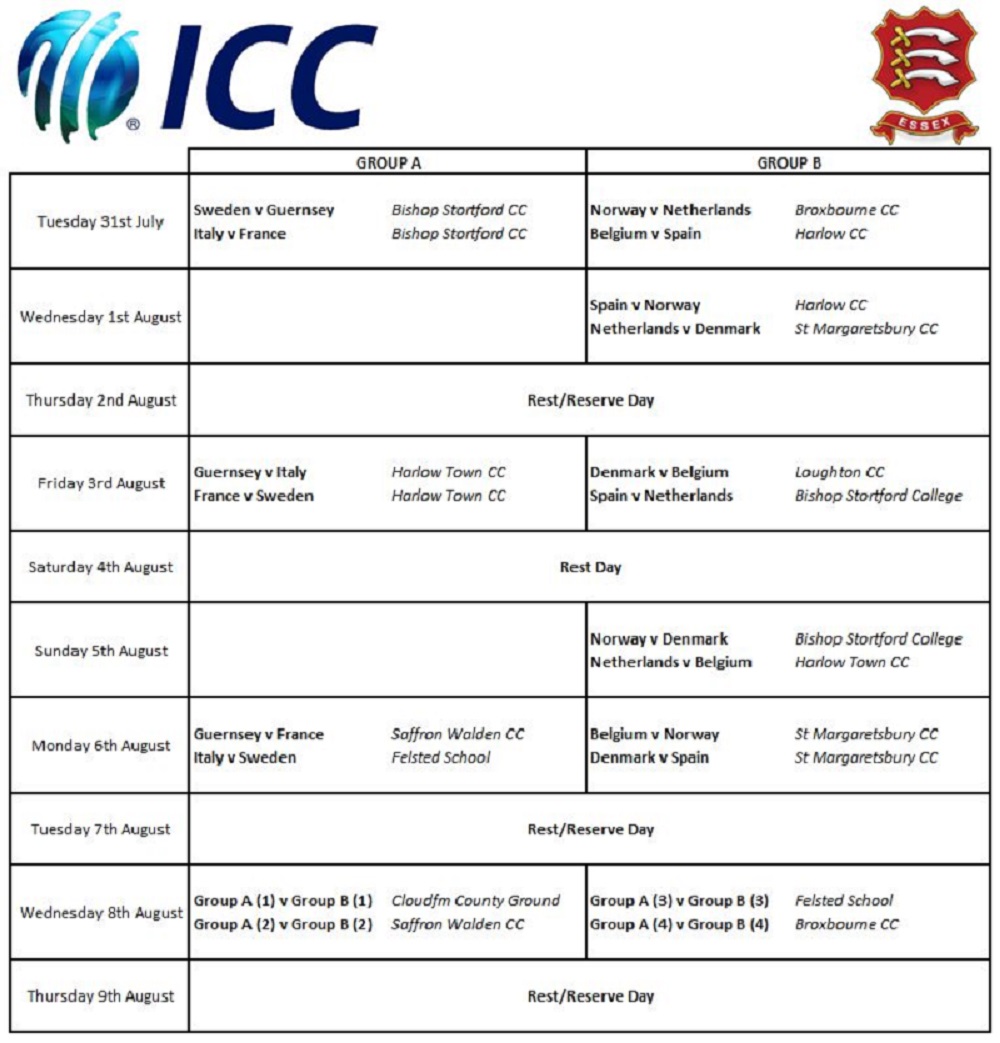 Demonstrating the increase of junior cricket in the region, an unprecedented number of European teams will participate in the pathway towards the ICC U19 Cricket World Cup 2020. France, Belgium, Sweden, Norway and Spain will all take part in an U19 pathway event for the first time.

The event will be hosted by the Essex County Cricket Board (ECCB) in conjunction with Essex Cricket in the Community, with at least 10 different venues across the region playing host to international cricket. ECCB Head of Operations Dan Feist states: ‘Essex Cricket are proud to, once again, host an exciting and dynamic tournament on behalf of the ICC. Working alongside quality local clubs and volunteers, we look forward to championing international cricket and making it accessible, in order to excite and engage with the local community during the summer.’

The tournament will take place between the 31 July and the 9 August 2018. A group of five and a group of four will compete in a single round robin before heading into a play-off round which will determine the final standings. Both group winners will be joined by the winner of the third-place play-off match and progress to the ICC U19 CWC Qualifier Europe Division 1 in 2019.

As well as automatic qualification to Europe Division 1 next year, the two group winners will also have the chance to battle it out for the top spot at The Cloudfm County Ground in Chelmsford.

Denmark will be looking for a repeat performance from 2016, when they dominated the European Division 2. Denmark CEO Alex Olsen stresses the value of these events: ‘We are delighted to be participating in ICC pathway events. It provides our players with an insight to what touring and playing elite tournaments is like on turf wickets.’

Netherlands will come to the event with a point to prove having missed out on promotion from Division 2 last time round. With the senior side set to take part in the 13 team ODI league, the tournament will be a chance to demonstrate the strength and depth of the players coming through the junior set-up.

Newcomers Belgium, France, Norway, Spain and Sweden will be keen to show their rapid development and provide a strong challenge to Denmark, Guernsey, Italy and Netherlands.